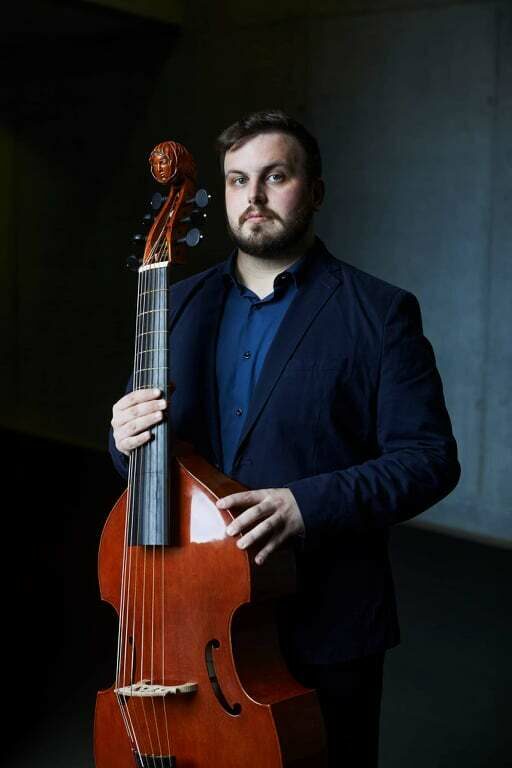 Today the five finalists shone in the long-awaited final of the MA Competition. Each of them played one solo work, one solo concerto and one of the six unique lamentos created by the Belgian composer Heleen Van Haegenborgh. Jan De Winne, chairman of the jury, just announced the names of the laureates.

The Italian Teodoro Baù (1992) studied viola da gamba at the Schola Cantorum Basiliensis with Paolo Pandolfo and at the Mozarteum University in Salzburg with Vittorio Ghielmi. In 2015 Baù won the first prize at the Bach-Abel Competition in Köthen. He recorded for Alpha, Arcana, Glossa, Decca, Deutsche Harmonia Mundi, Claves with the ensemble La Fonte Musica in which he plays the ars subtilior repertoire with the medieval fiddle.

The winner goes home with a cash prize and an international concert tour. This promising artist will also have the opportunity to record a CD with the prestigious Ricercar label.

Discover more about the finalists here.

Artist-designer Christoph Hefti was inspired by our festival theme 'Mind & Body' and creates a unique scenography for all concerts that take place in the Concert Hall and the Chamber Music Hall during MA Festival 2021. After studying textile design in Zurich and fashion at Central Saint Martins in London, Hefti started designing for Jean-Paul Gaultier in Paris and Dries Van Noten in Antwerp.

Christoph Hefti’s most recent projects include a tiled floor for the entrance of Ghent’s Arts Centre Vooruit, a textile wallpaper for Maison Dandoy’s flagship store in the Galeries de la Reine, a set design including a printed curtain for a performance by Diederik Peeters and printed fabrics for Swiss fashion designer Julian Ziegerli.

Between 6 and 14 August you can admire the designs of Christoph Hefti during one of our concerts at MA Festival!

Enjoy early music year-round with the playlists by MA Festival on Spotify, put together especially for you. Each month we present to you a playlist with known music and new discoveries. These are put together by musicians and specialists from within the MA Family.

The next playlist was put together by Tom Goossens, the young director of DEDAPONTETRILOGIE that will will play at MA Festival on 10 August.

"MA Festival asked me to compile a list of my favorite Spotify tracks that have a link with baroque music. Since my DESCHONECOMPANIE is a guest at MA Festival with the theatrical performances of DEDAPONTETRILOGIE, I was guided in my choice by the criterion of 'theatrical strength”. I chose fourteen pieces of music, dating from Shakespeare's time to Ane Brun's today. It is music that would not let go of me from the first moment I heard it and that often expresses a special theatrical situation: a lover of Jupiter who admires herself in a magic mirror that makes her look prettier, or two men in disguise being introduced to a chambermaid. Other arias manage to convey more recognizable feelings, from which I, as a listener, draw comfort. In an oboe-concerto composer Marcello does so even without words.
Personally, I like Mozart's last operas the most, but in his young work I really enjoy the 'best of both worlds': his first steps in classicism, combined with what he took with him from baroque music. I selected an aria from his early opera Mitridate that takes a remarkable step towards many later arias such as Smanie implacabile from Così fan tutte and D'Oreste, d'Ajace from Idomineo.
For entertainment, I colored a little more outside the timelines of the Baroque, from the Norwegian singer-songwriter Ane Brun singing Monteverdi, to a surprising aria by a Rossini who seems nostalgic for the Baroque, and a lost Puccini melody in a song by the American jazz singer Della Reese." - Tom Goossens

Listen to the playlist here.

Starting today at 10 am you can buy tickets via the website, by phone (078 15 20 20, every weekday from 2 pm to 5 pm) and at the In&Uit box office. You’ll find all information about ticketing under practical.

NB! If you wish to buy a ticket for yourself only, please do this by phone or in person via In&Uit. Due to coronavirus measures, it is not possible to buy a single ticket through the website.

Last week our ticket sales opened to Friends and on 23 June general ticket sales will also commence. From 10 am you can buy tickets via the website, by phone (078 15 20 20, every weekday from 2 pm to 5 pm) and at the In&Uit box office. You’ll find all information about ticketing under practical.
NB! If you wish to buy a ticket for yourself only, please do this by phone or in person via In&Uit. Due to coronavirus measures, it is not possible to buy a single ticket through the website.

Would you like to purchase tickets now? As a Friend of MA Festival you have access to the exclusive presale for Fiends. This began on 11 June. You can find all the advantages of and information about becoming a Friend under Friends.